The MCSS creates reports and publications with support from our funders and key partners to support our initiatives and events.  Selected reports and publications are available below.  In addition, the MCSS maintains several affiliated websites with valuable resources for community college leaders including the Michigan Transfer Network, MiTransfer Pathways, Michigan Guided Pathways, and the Right Math at the Right Time. 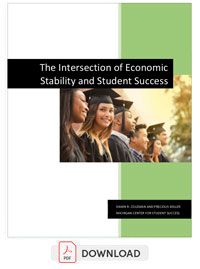 The Intersection of Economic Stability and Student Success

This publication is a reflection of the work community colleges have made towards the building of systematic strategies that address the non-academic barriers to student success. This includes an overview of the MI-BEST Initiative, outlining the progress towards scaling economic stability practices, and insights gleaned from interviewed colleges. 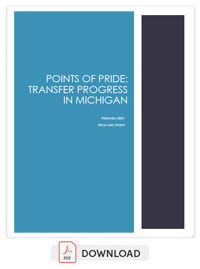 This publication discusses the progress toward creating more accessible and equitable transfer pathways through the implementation of the Michigan Transfer Network and the MiTransfer Pathways. The report features six points of pride highlighting improvements at Michigan’s community colleges and explores our ongoing commitment to improving opportunities for transfer students. 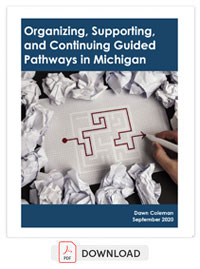 For the past six years, Guided Pathways has provided a framework for the various initiatives of MCSS. The three-year GPI 2.0 initiative is now coming to a close, but Guided Pathways work in Michigan will continue. This report is based on findings from a qualitative study of the 13 Mentor Circle colleges to determine how colleges organized the work of implementing Guided Pathways and how they plan to sustain and build on their progress. 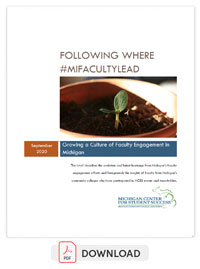 This brief describes the evolution and latest learnings from Michigan’s faculty engagement efforts and foregrounds the insights of faculty from Michigan’s community colleges who have participated in MCSS events and roundtables.

Keeping Colleges on the Path: A Look at Michigan’s Guided Pathways Progress from 2017-2019 (September 2019)

The Right Math at the Right Time for Michigan:  “Coalition of the Willing” Strengthens Math Pathways in a Decentralized Higher Education System (March 2019)

Guided Pathways: The Scale of Adoption in Michigan (January 2018)

Michigan Credit When It's Due Digital Communication Kit (October 2017)

Forging New Pathways: The Impact of the Breaking Through Initiative in Michigan (November 2012)

Autonomy and Innovation: Systemic Change in a Decentralized State (October 2012)